In the framework of the Thessaloniki International Fair (TIF), the Hellenic Statistical Authority (ELSTAT) participates in the Exhibition with its own stand,in order to inform the general public about official statistics. During the exhibition, ELSTAT organises at its stand many recreational and educational activities for children. Children have the opportunity to get an insight into the importance of statistics. These events are part of ELSTAT’s actions aimed at fostering statistical literacy in Greece.

Following the successful presence of the Hellenic Statistical Authority (ELSTAT) in the Thessaloniki International Fair (TIF) in 2018, when ELSTAT presented for the first time its actions for “Fostering Statistical Literacy in Greece”, the focus of this year’s participation in the 84th TIF continued to be the promotion of this strategic choice.

More specifically, during the 84th TIF, the visitors at ELSTAT stand (No 15, stand 27) had the opportunity to be informed on the actions of ELSTAT that are implemented or under construction, per educational level, aiming at bringing pupils, students and teaching staff closer to the work of ELSTAT and the way official statistics are developed, produced and disseminated. Moreover, they had the opportunity to learn about all the statistical surveys conducted by ELSTAT and the role and legal framework governing the Hellenic Statistical System.

During the TIF, ELSTAT organised a set of lectures on statistics, which were attended by pupils coming from Secondary Education Schools of Northern Greece. The pupils and the visitors at ELSTAT stand were informed on the mission of ELSTAT and its actions for Fostering Statistical Literacy in Greece, the Memoranda of Understanding with the Ministry of Education and the Aristotle University of Thessaloniki, as well as on the European Master in Official Statistics (EMOS), a programme of post graduate education on official statistics.

It's worth noticing that this year, ELSTAT presented,for the first time,to the general public the electronic platform “Census at School”, which is an educational programmedeveloped by ELSTAT, with own resources, aiming at training pulls on statistics, through educational material, encompassing detailed guidelines and the procedure for conducting a statistical census survey.

For more information on the presence of ELSTAT at the 84th TIF click here. 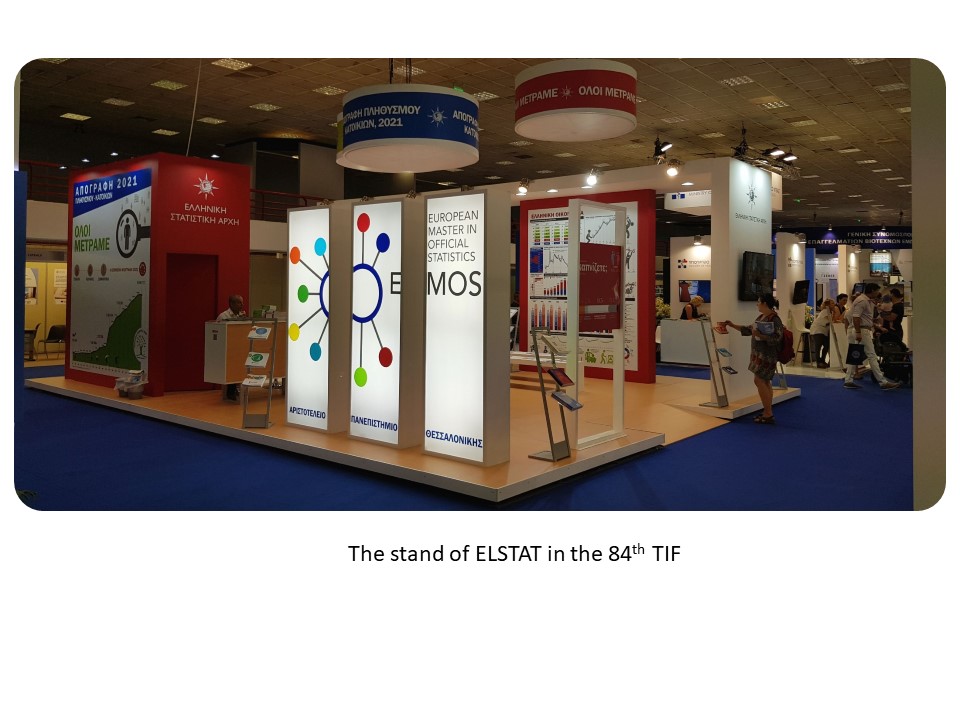 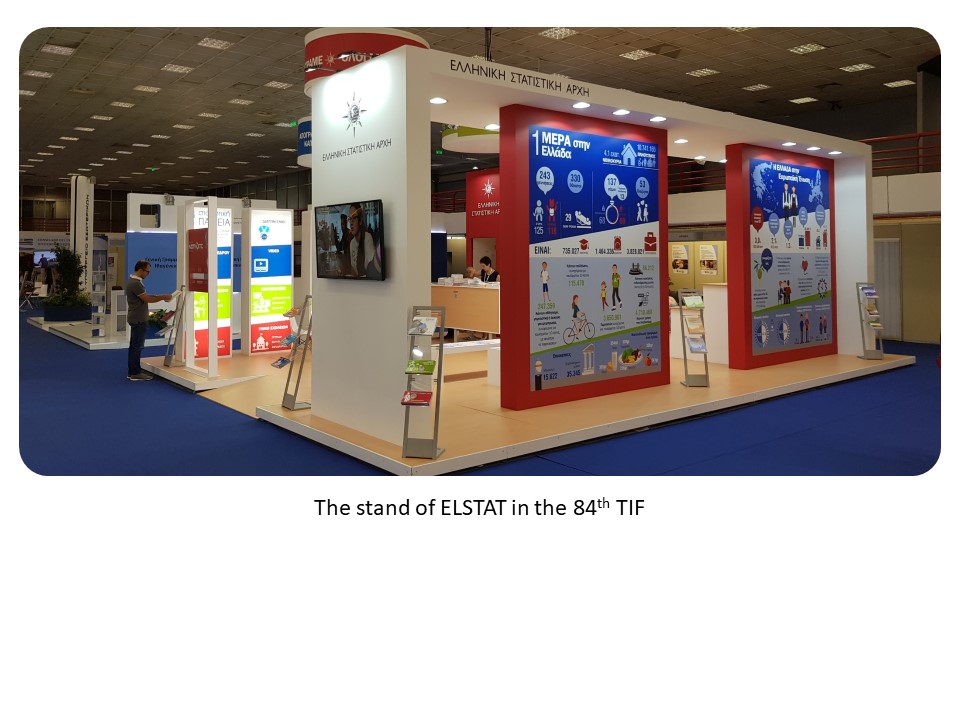 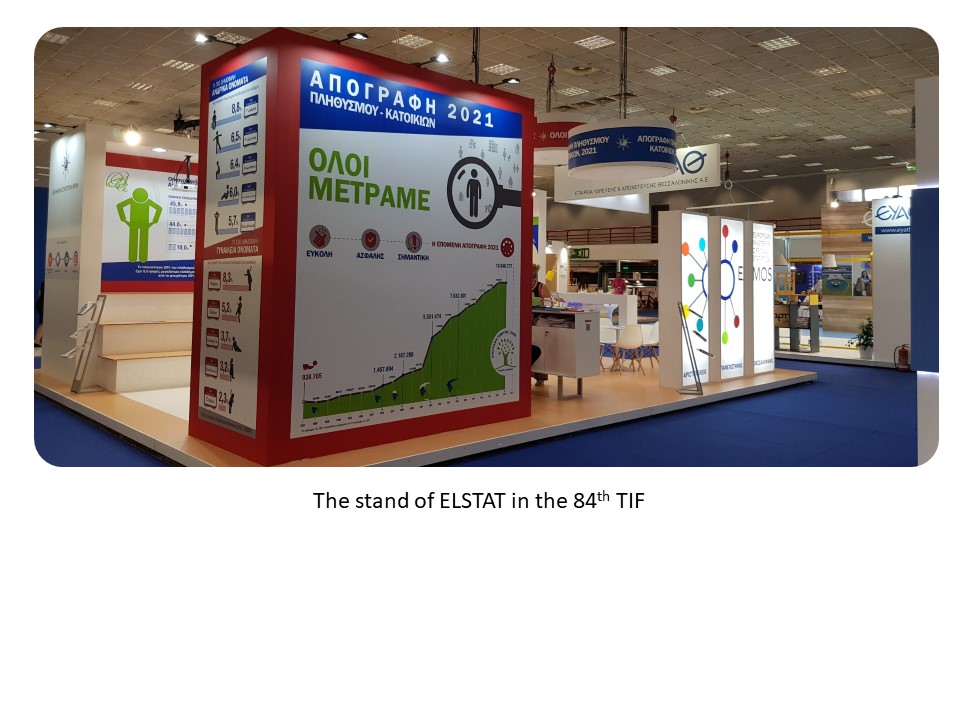 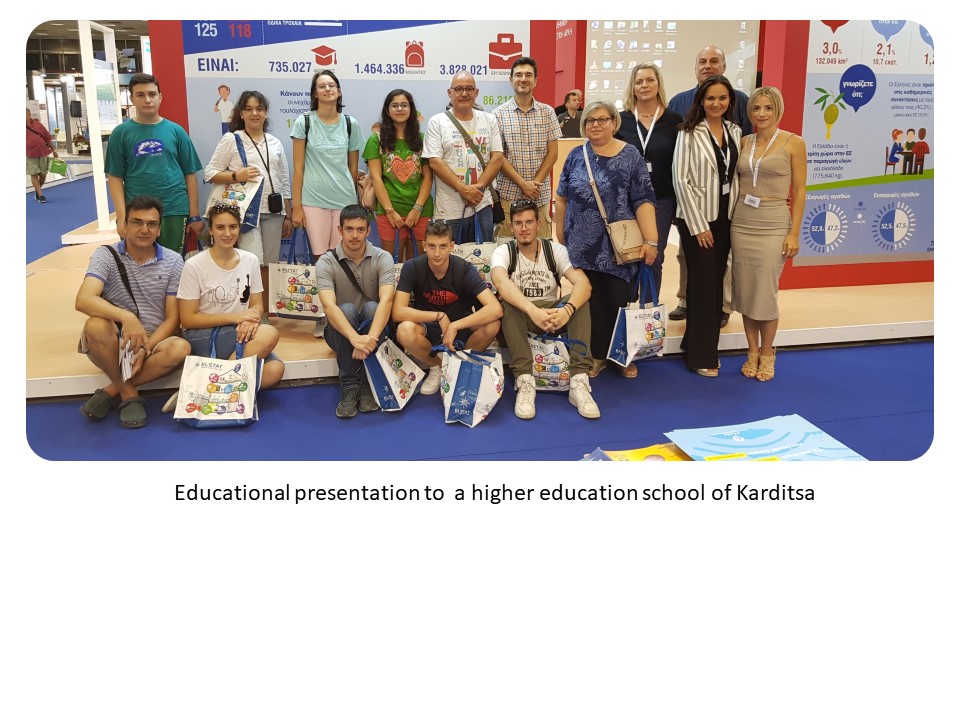 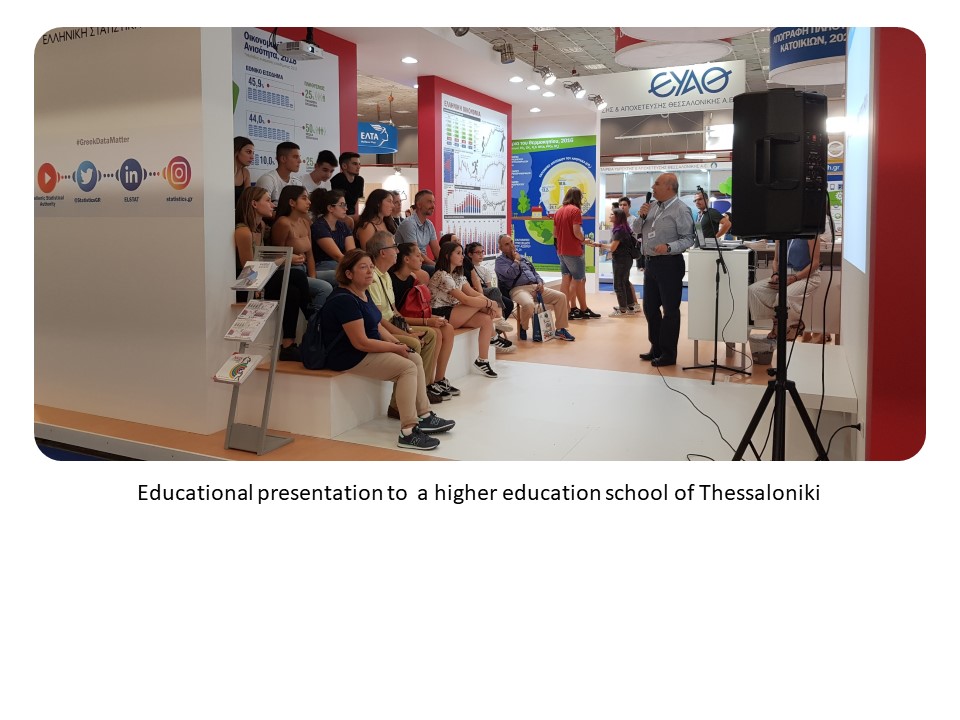 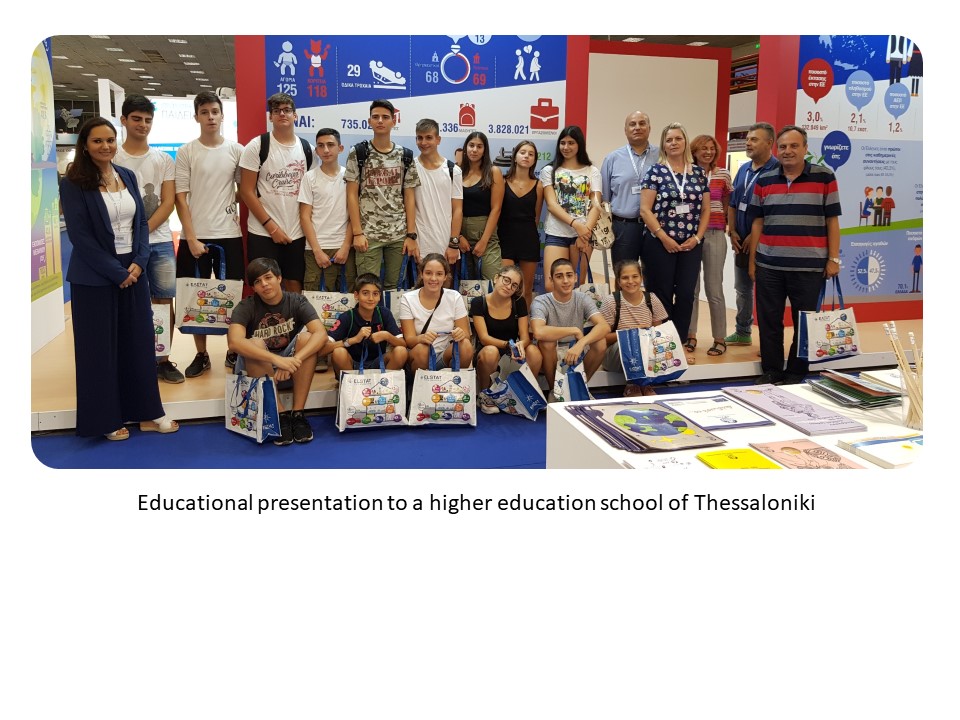 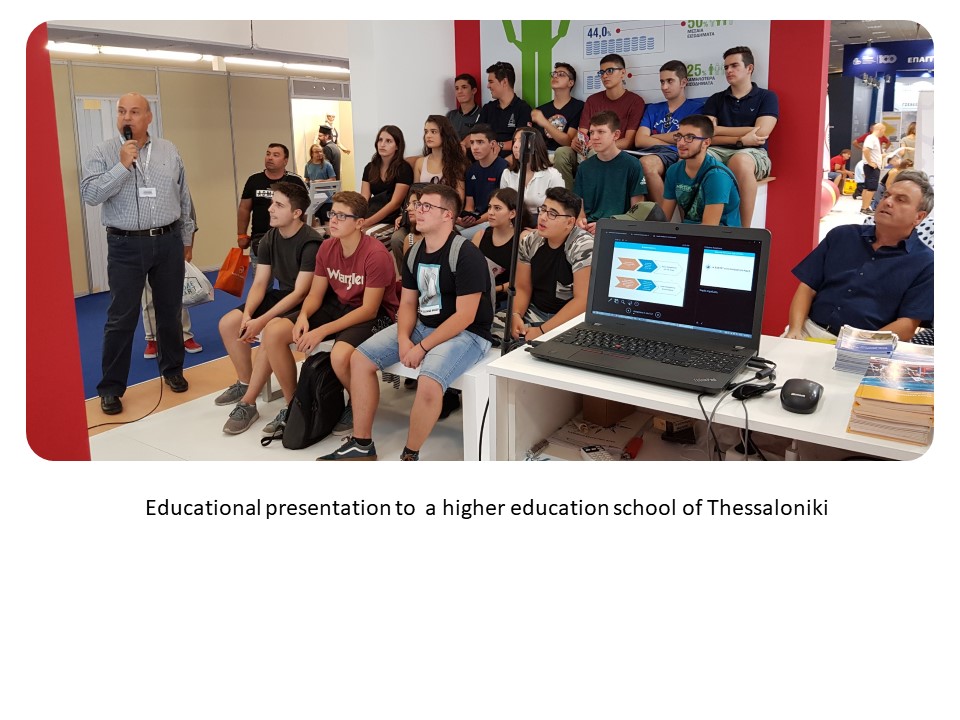 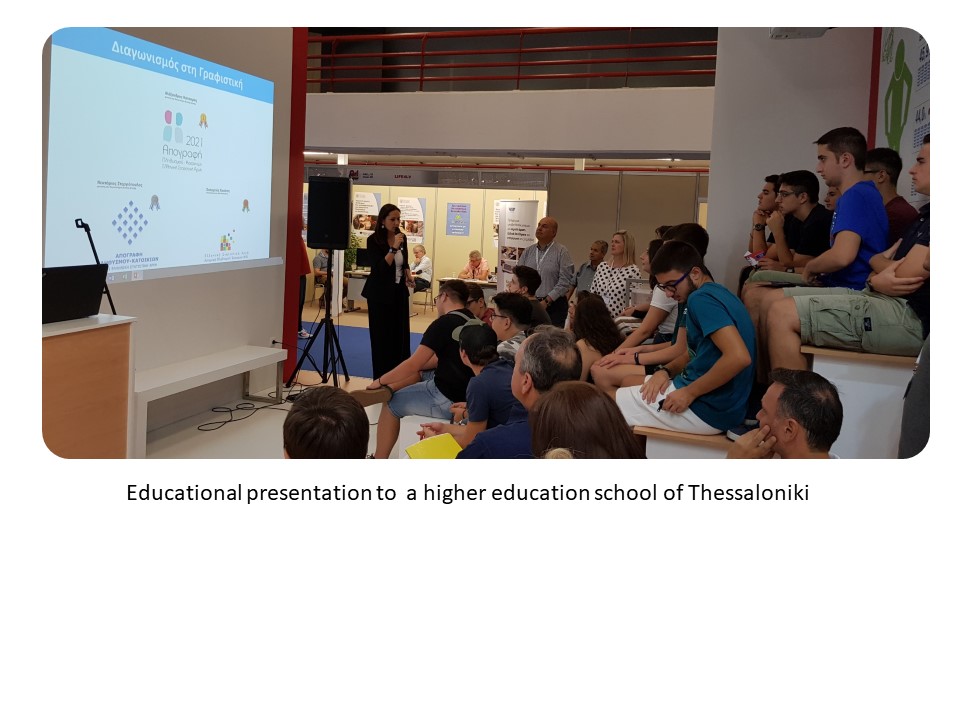 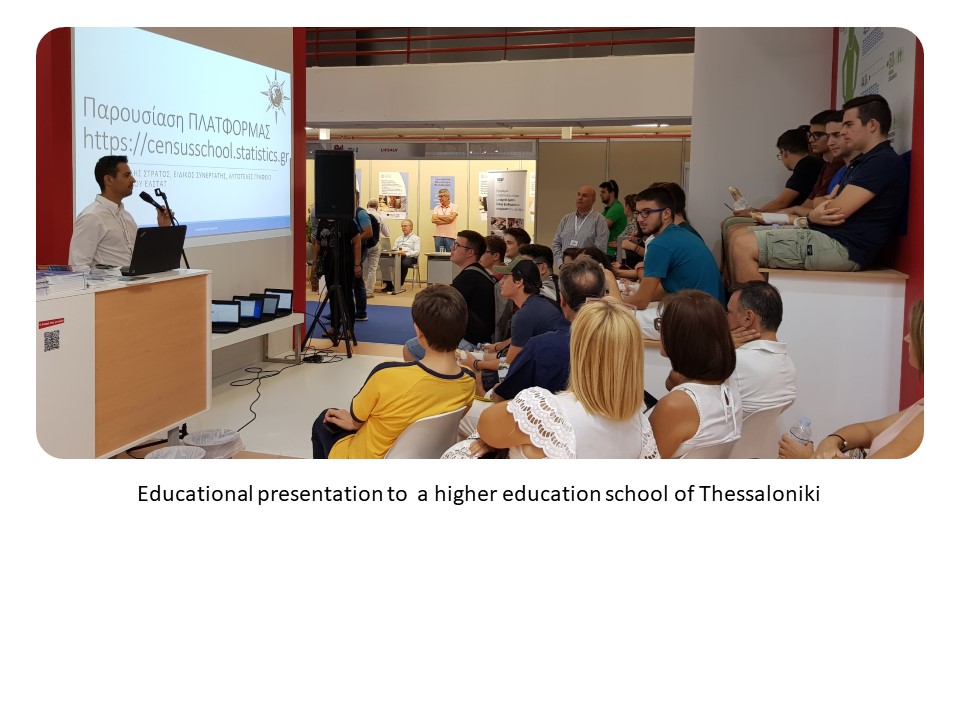 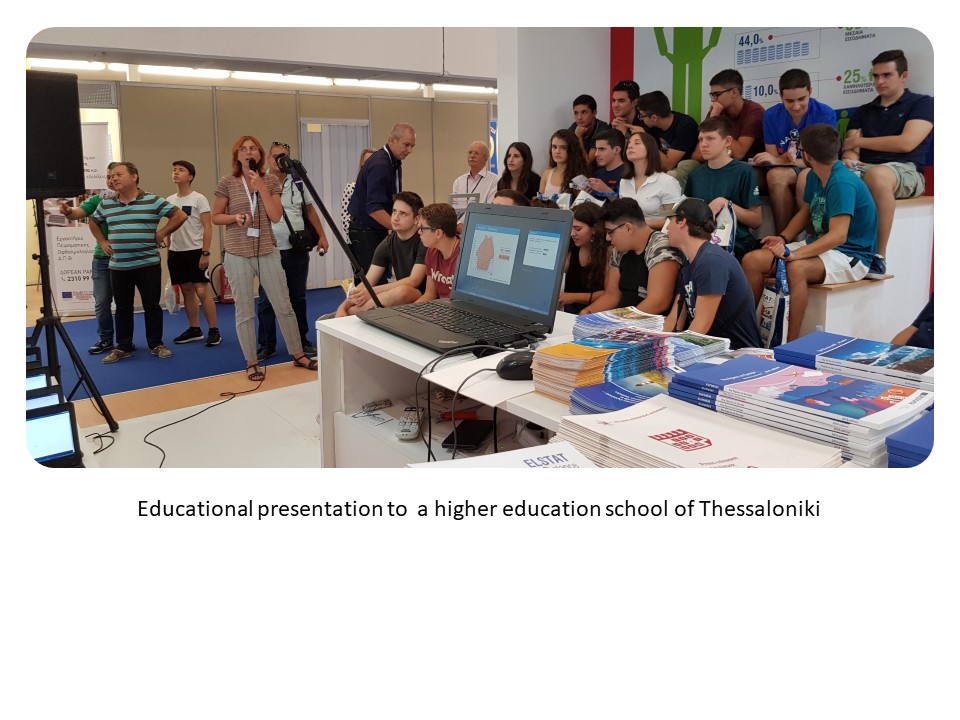 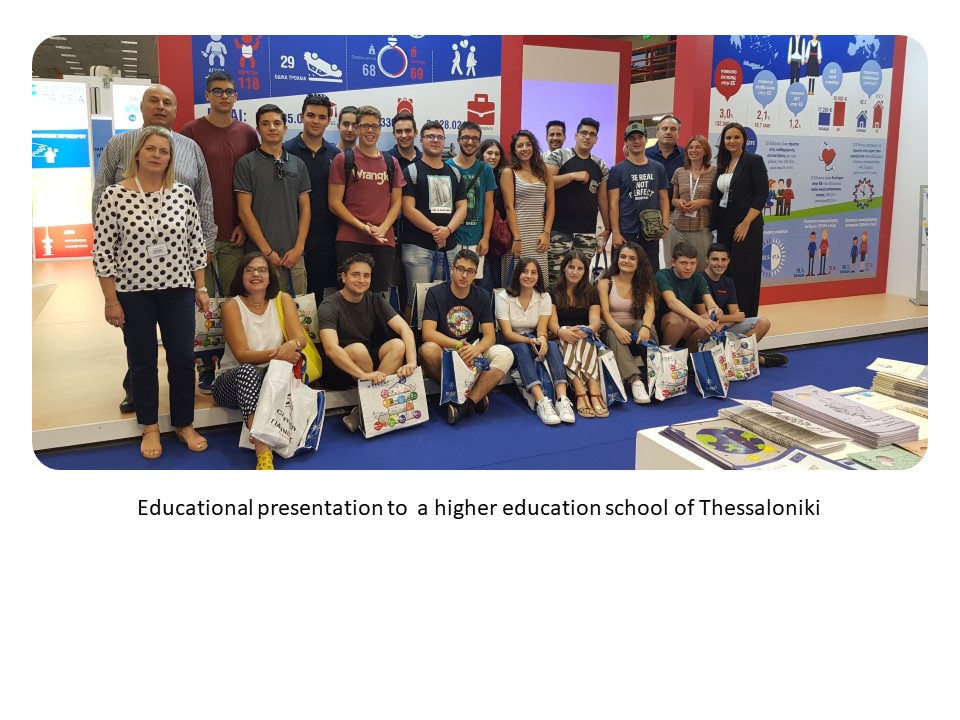 The activities for “Fostering Statistical Literacy in Greece” were at the heart of ELSTAT participation in the 83rd Thessaloniki International Fair (TIF).

More specifically, at its stand (No 15, stand 27), ELSTAT showcased the actions that are implemented or under construction, per educational level, aiming at bringing pupils, students and teaching staff closer to the statistical science and helping them understand how official statistics are developed, produced and disseminated.

During the TIF, ELSTAT organised a set of educational events on statistics, which were attended by pupilscoming fromSecondary Education Schools of Thessaloniki.

At ELSTAT stand, visitors could find information/educational/promotional material and ELSTAT publications, as well as the brand new “Young People in Greece-2018”publication, which was presented for the first time in the TIF.

For more information on the presence of ELSTAT at the 83rd TIF click here. 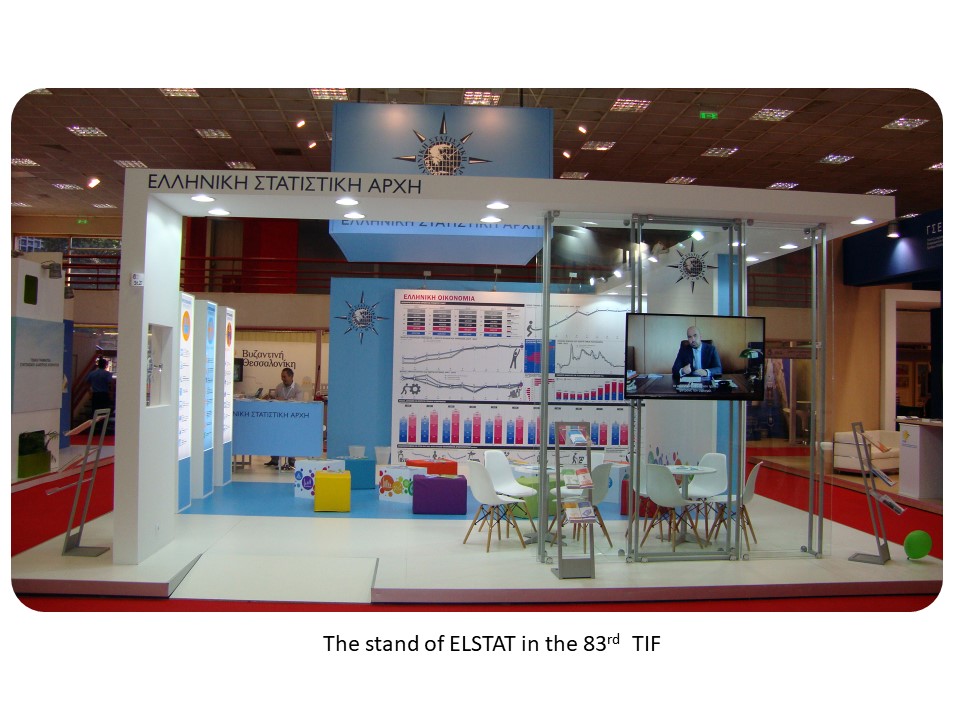 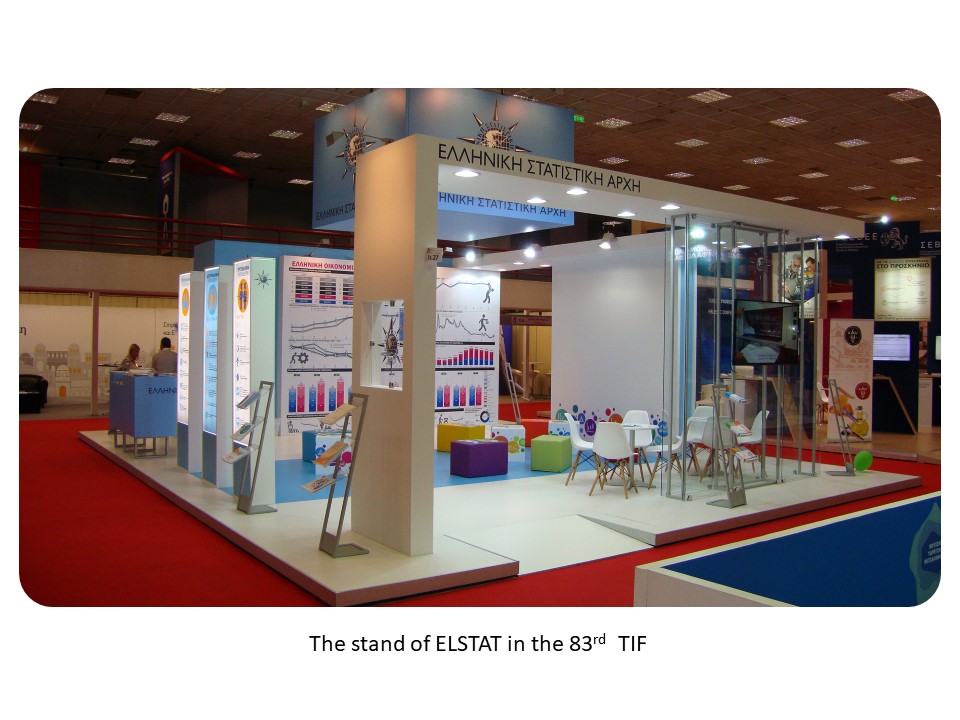 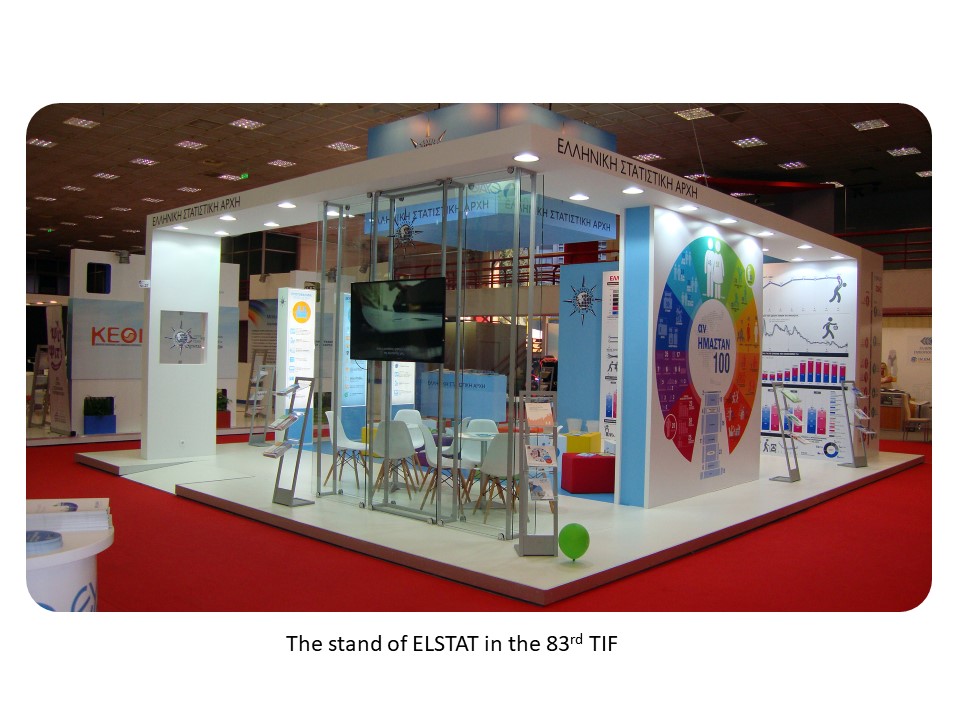 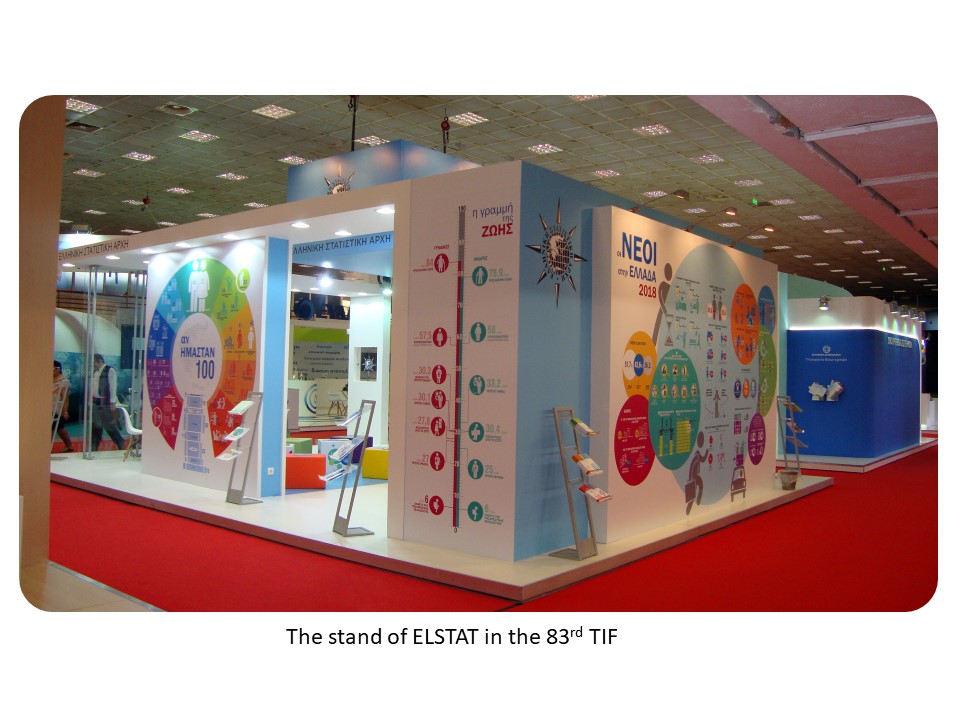 In the framework of its cooperation with social agencies, launched during the 81st TIF, ELSTAT hosted at its stand events organised by UNICEF, focusing on refugee and migrant children. The relevant events included:

• Presentation of a fairy tale on refugee children written by SokratisMantzouranis (Saturday, 16.9.2017, at 12:00, ELSTAT stand)

For more information on the participation of ELSTAT in the 82nd TIF click here. 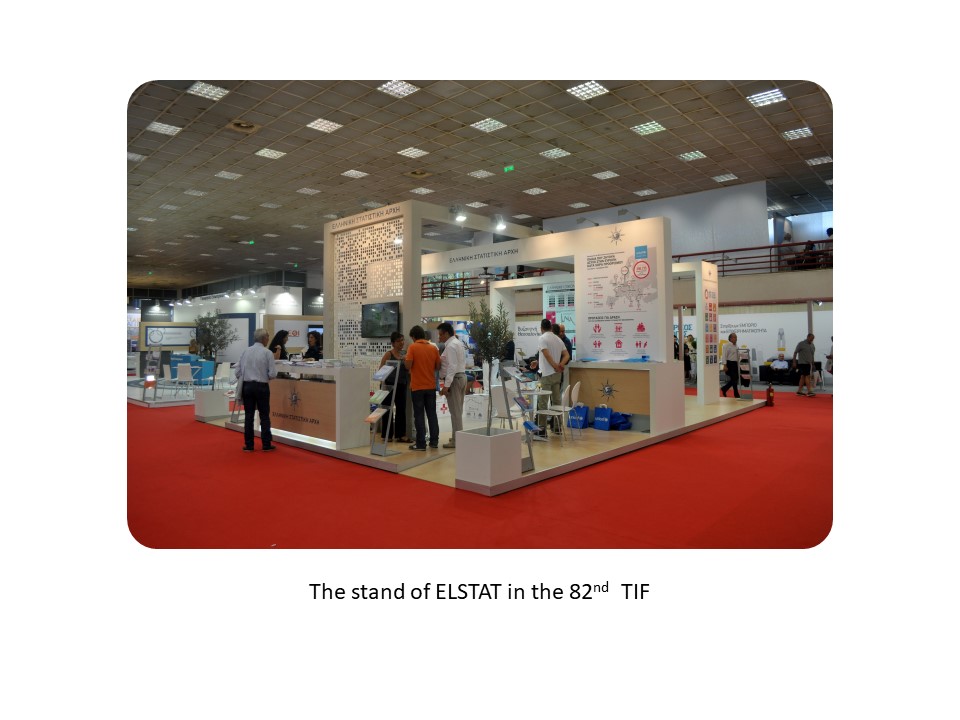 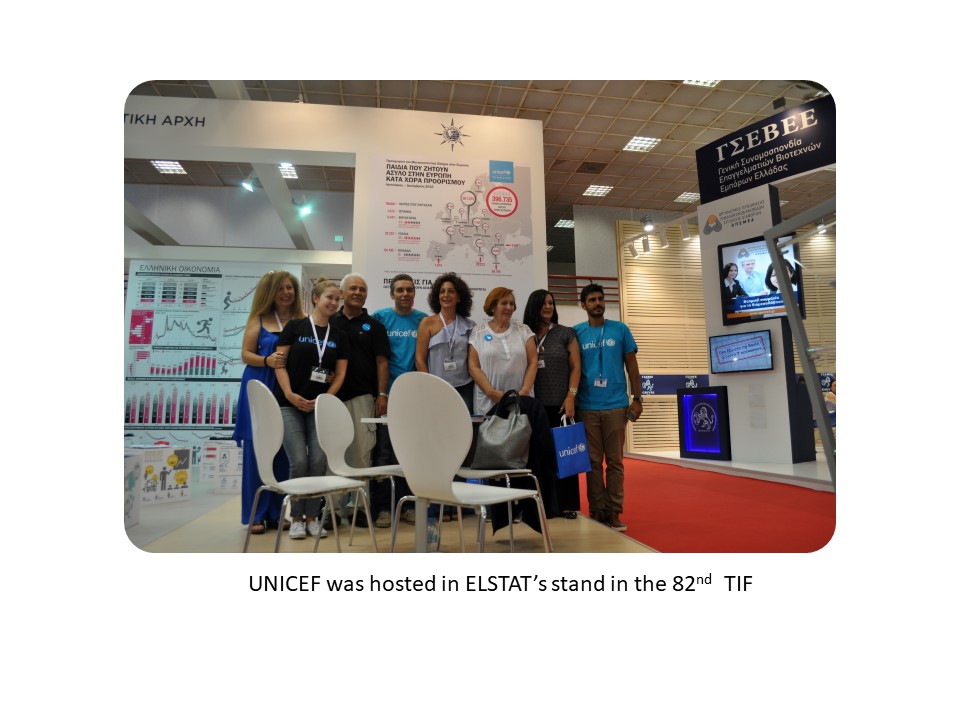 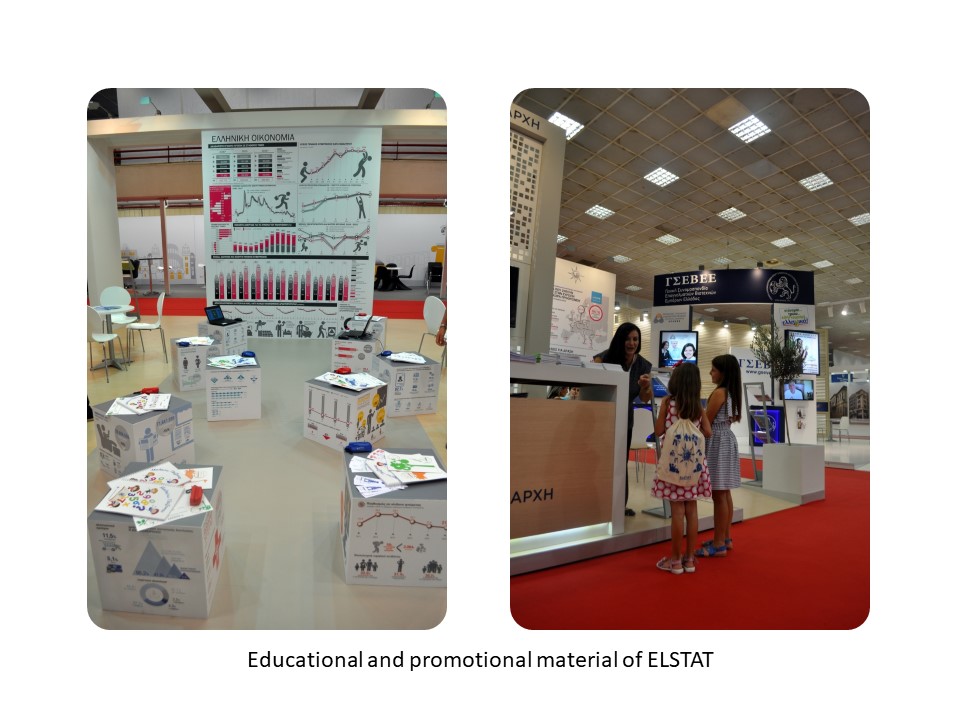 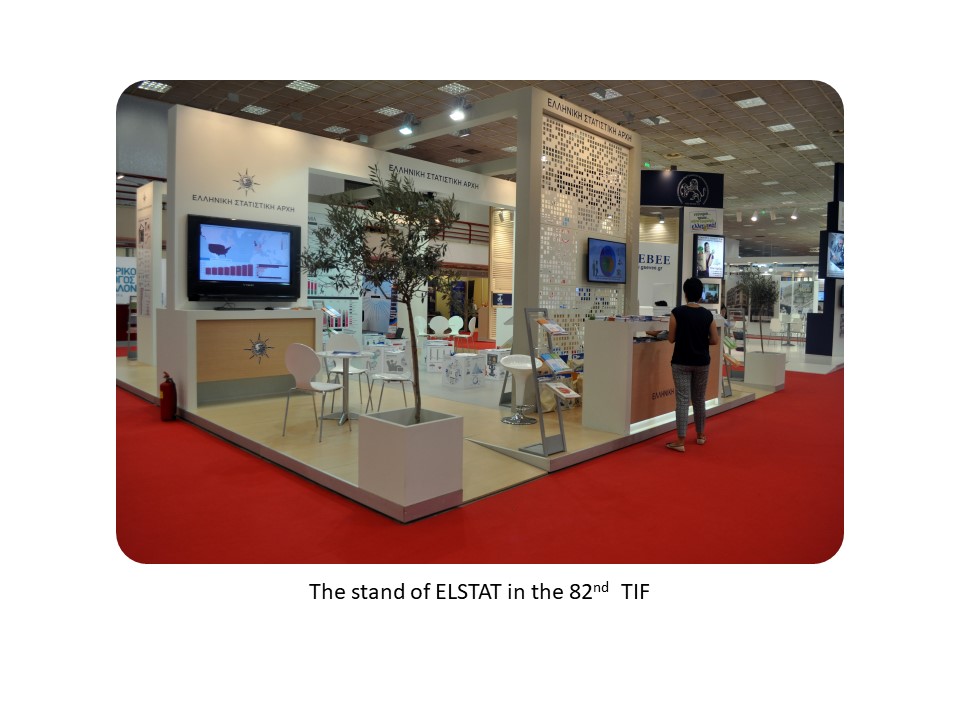 The Hellenic Statistical Authority, fully respecting the UN Fundamental Principles governing the production of official statistics and more specifically the principle on equal access to statistical information, cooperated, for the first time in 2016, with the Center for Education and Rehabilitation for the Blind (C.E.R.B.) and the Centre for Guide Dogs of Greece in a series of events. The activities which were hosted at the stand of ELSTAT included:

For more information on the participation of ELSTAT in the 81stTIF click here. 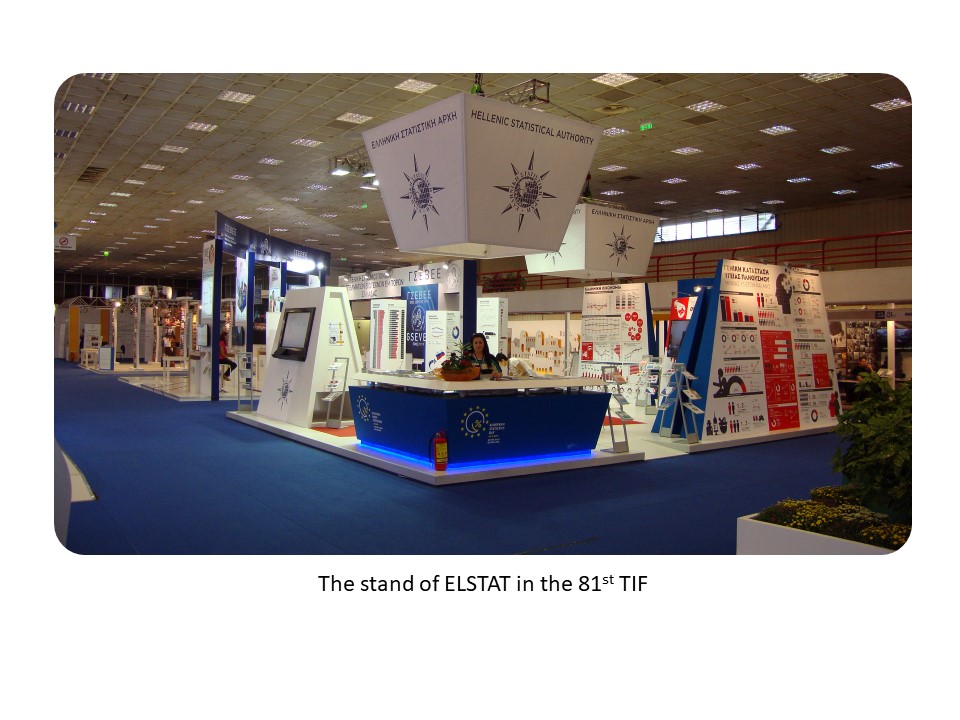 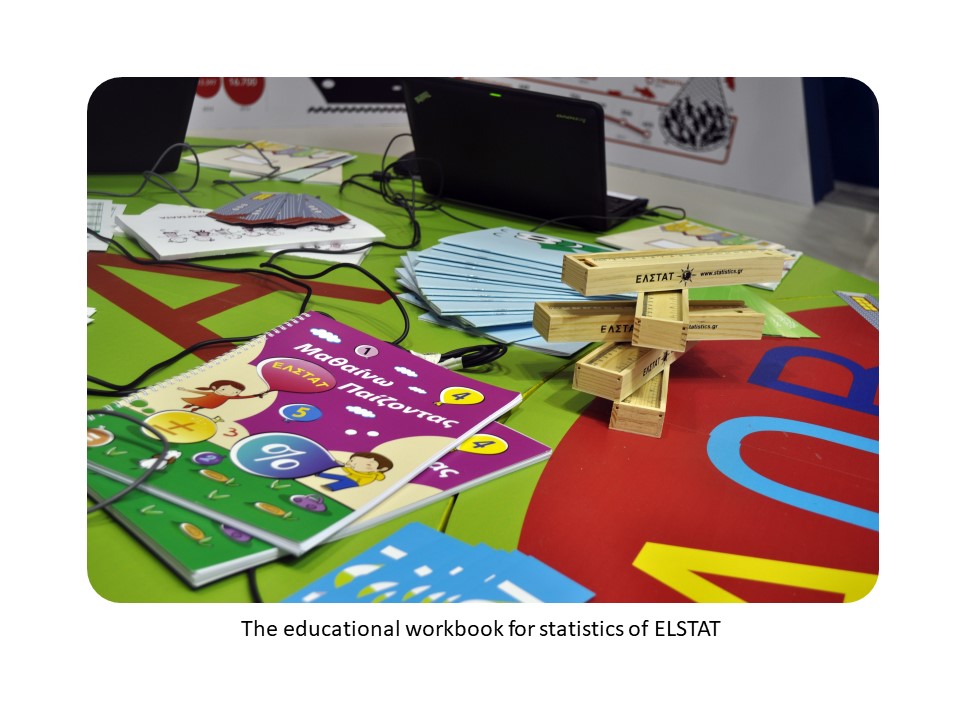 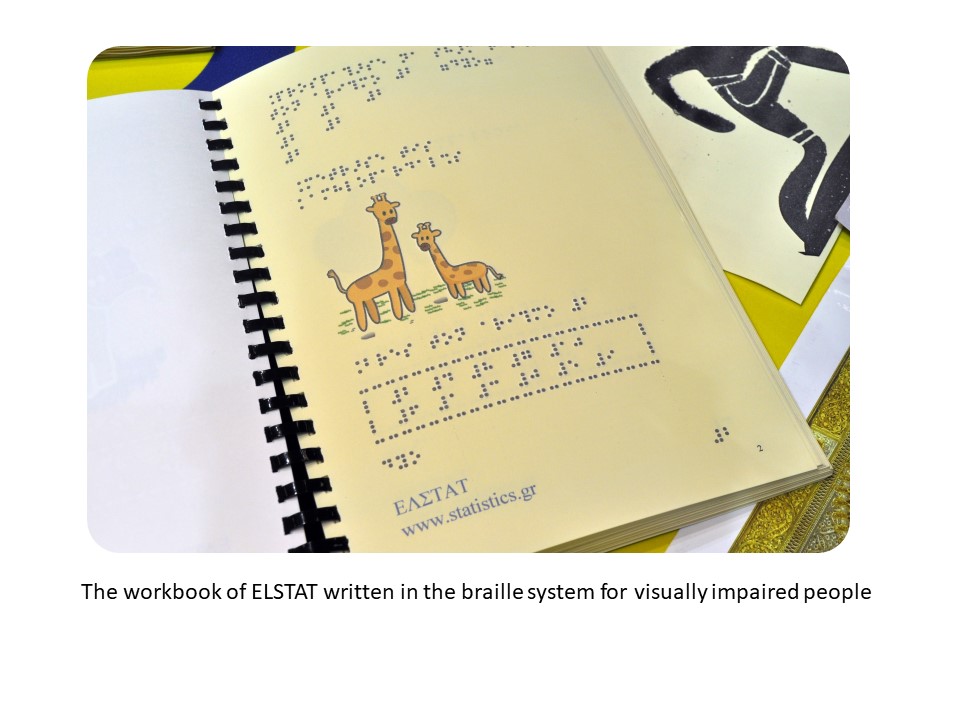 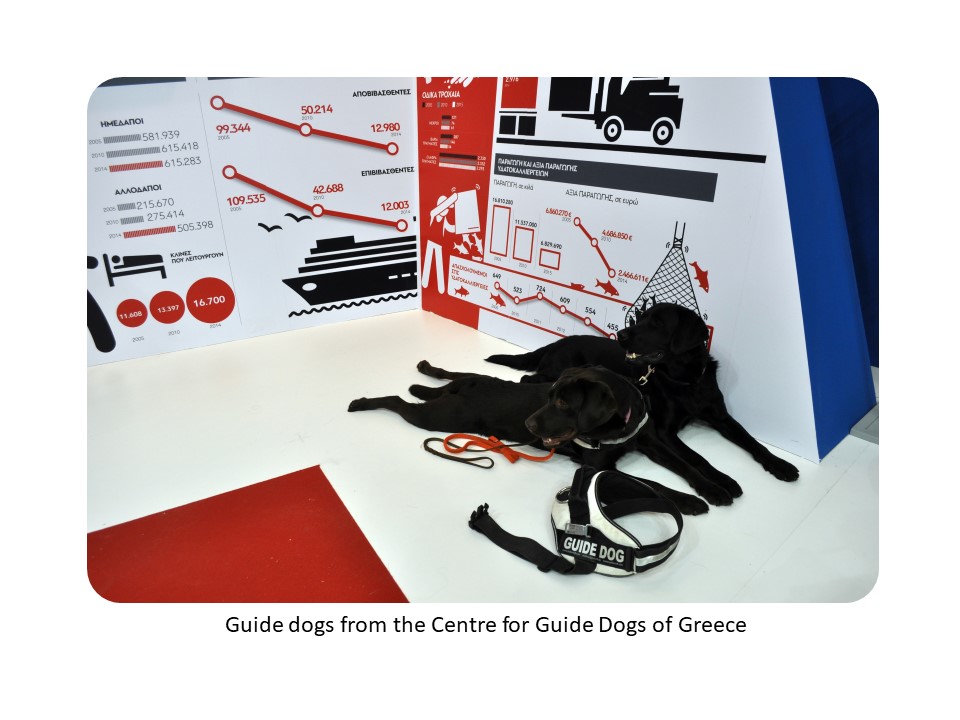 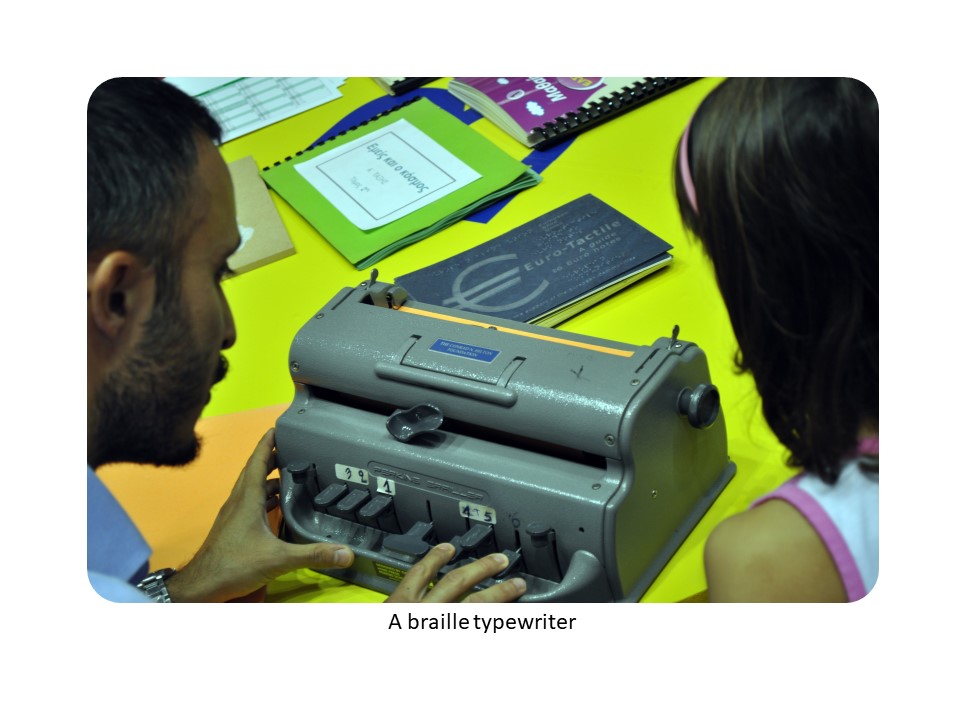