The evolution of the statistical service of Greece 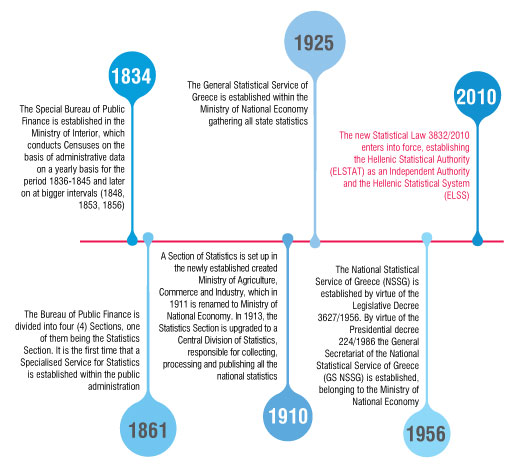 1828: conduct of the first Population Census.

1861: the Bureau of Public Finance is divided into four (4) Sections, one of them being the Statistics Section. It is the first time that a Specialised Service for Statistics is established within the public administration.

1861: conduct of the Population Census and the Agricultural Census

The modernisation of public administration, including the Specialised Service for Statistics, begins in 1910. A Section of Statistics is set up in the newly established Ministry of Agriculture, Commerce and Industry, which in 1911 is renamed to Ministry of National Economy. In 1913, the Statistics Section is upgraded to a Central Division of Statistics, responsible for collecting, processing and publishing all the national statistics concerning population, vital statistics and migration, production in agriculture, industry, manufacture and related sectors, statistics on transport, internal/external trade, communication, justice, prices, etc. A Statistics Council is established consisting of university professors and representatives of the Chambers of Commerce and Industry. The main statistical works of this period are: the Agricultural Census and the Surveys on Prices of basic consumer goods (1911), the Population Censuses on the new territories ceded to Greece (1913), the Industrial Census and the Population Census (1920) and the Census of Refugees from Asia Minor (1923).

1925:  the General Statistical Service of Greece is established within the Ministry of National Economy gathering all state statistics.

By virtue of the Presidential decree 224/1986, the General Secretariat of the National Statistical Service of Greece (GS NSSG) is established, belonging to the Ministry of National Economy. The issues concerning the access of the GS NSSG to administrative sources and files and statistical confidentiality are governed by the Law 2392/1996.